skip to main | skip to sidebar

An update from Priyanka

"We started back up on lessons again today. Basically reviewed Paint and especially focused on using the mouse and getting used the concept of 'dragging' and selecting and selecting things. Standard 5 is definitely on different page and level as 4 and it is very visible. Students in 5 are able to grasp information and concepts a lot more quickly.

For the closing day ceremony, which is scheduled for Aug 5th we've selected 4 students from STD4 and 4 from STD5 to create a song with the XOs for the Stay Alive skit. We taught them how to use Tam Tam Jam and Edit today after school and we are planning on meeting them everyday after school so they can continue to practice. They grasped it pretty quickly and like it.

Tomorrow, we are having Anita teach Scratch n class tomorrow. It'll be the first lesson of Scratch. And Bryan will be taping it. We wanted to see how she will be teaching and get her used to it and have her show more interest and participation.

There are definitely challenges with the power situation ..because of limited power and charging time we have limited XO use time in the classroom which hinders their lessons and forces us to review materials constantly instead of starting a new program. We'll have to wait it out and see how things change once we have consistent power. Because I really think the students need more time on the XO to explore and play on their own to understand the activities."
Posted by Unknown at 9:37 AM 2 comments:

Letter from the Head of School

Greetings to you all from Takaungu! I would like to first take this opportunity to sincerely thank you for the support you offer to our school. Vutakaka Junior School is excelling academically, and that is our greatest achievement for the children of Takaungu and the surrounding villages. The results speak for themselves. At the end of Term 1, we placed 2nd and 3rd in the zone from the grades that we offer, classes 1 through 5. We have managed to improve during this term. As of the second mid-term exam, we are 1st place in our zone for grades 1-3 and 5, and 2nd place in the zone for grade 4. We are so proud of our students and teachers for working so hard to be on top!

This level of academic achievement has only been possible because of support from our sponsors. The ability to provide our students with textbooks and other reading materials, as well as to create a supportive environment for our teachers and staff has been crucial in reaching our goals.

In Term 2, we were given the gift of technology through a grant of 100 XO laptops. In my first letter of the year, I said that we were aspiring to train our pupils in modern technology. This is now a ‘dream come true.’ Our pupils are learning fabulous new things with their laptops and we believe this will bring their performance and their futures to greater heights. I appreciate the collective efforts involved in introducing our students to the XO laptops, and want to thank everyone involved in making this happen.

We are still running the various clubs at our school, and these help to nurture the students’ natural talents and abilities. Students are exposed to new activities and social environments through the garden club, the drama club, and the debate club, to name a few. Our sports teams also continue to help students develop. This term, we took our girls football team to a competition in collaboration with Moving the Goalpost, an organization dedicated to providing girls with the opportunity to play football. The greatest challenge for our sports program is the procurement of sports attire. The families of our students cannot afford uniforms, and our students are forced to play in their school uniforms. In the future, we hope for donations of or assistance in purchasing uniforms for girls football, boys football, basketball, and volleyball.

Despite all of our achievements, there are still challenges faced. If efforts can be made to overcome some of these challenges, Vutakaka Junior School (VSJ) can continue to be such a top school. Our biggest need now is support for infrastructure. VJS is growing every year, and we want to make sure we can offer our oldest students a place each year in the future. We need to build more classrooms, toilets, offices, and storage space at the EAC’s primary school property. Our lunch program is one of the most costly but important parts of our school. Every day, students who would otherwise not eat lunch are given a nutritious meal. We need your continued support to make sure our students are well nourished each day and ready to learn.

Again, I want to thank you all for the support you have already given, and the support you will give us going forward. This school is changing the lives of the students and their families in the Takaungu sub-location, and we must continue to provide this important service to this community. I welcome you all to come to Kenya and visit us and see the school in action for yourselves. 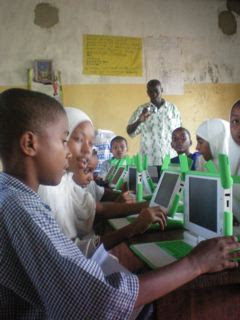 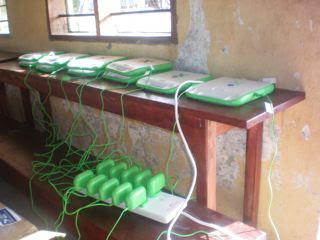 We gave the XOs out to both class 4 and 5. All Priyanka could get through in the class time for each class was rule coverage, recording which kid has which laptop by taking the batteries out and writing the barcode number, turning on the computers (choosing color and writing name), using the mouse, opening the calculate function, doing some small calculations, and then shutting down. The kids were really excited!
We had been using the new classroom for Std 3. We decided yesterday that we would covert it back to a computer lab for the rest of the year. The 12 benches and tables will go in, and we brought a huge locking cabinet over from Vutakaka that the kids will lock their laptops in at the end 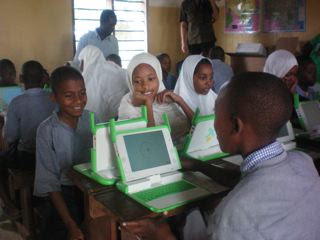 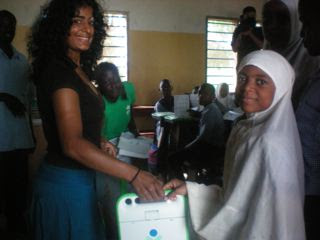 The Takungu community meets their XOs!

Today, the XOs were introduced to the Standard 4 and 5 classes and their parents! The meeting was a huge success and everyone is very excited about the program. 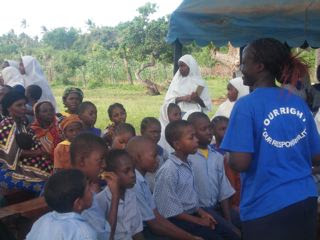 There have been 5 teacher trainings so far and 2 teacher meetings about the laptops. The teachers have learned the following programs: chat, speak, write, Tam-tam mini, scratch, distance, etoys, memorize, and record.

Bryan is going to spend the day setting up the server and the computers at the school. He is going to train Omar (the Standard 5 teacher) in the tech side of things, so that if problems arise in the future, Omar should be able to work out the kinks. The deployment to the students is happening Monday (standard 4) and Tuesday (standard 5). Unfortunately, we will be using the generator to charge the computers initially as the electricity is still not connected.

The remaining computers will be given to the current Standard 3 class next year (thereby covering 4-6). 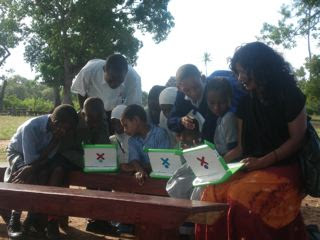 Priyanka is going to make a spreadsheet to record which computer is given to each student. Even though the laptops won't go home with the kids, ownership is still important. We met with some visitors from OLPC last week. They feel very strongly about sending the computers home with the students, but Priyanka, Bryan, and I think that cannot happen until next year at the earliest. We feel that it is pretty much a fact that the computers will last for a shorter amount of time if they go home with the kids, but we are willing to pilot it next year.

Priyanka has been working hard with the teachers to develop lesson plans for Term 3 using the XOs in Science, English, Math, and Social Studies. Breona and Jen, back in the States, will add to the lesson plans and help support them by caching websites to help support the lessons.
For the rest of Term 2, the students will be learning the laptops during one PE class per week and two Creative Arts classes per week. There will also be optional after school hours four days a week (two for Standar 4 and two for Standard 5). During the school break, the students will have the first week off, and will resume studies with the computers the second week of break. 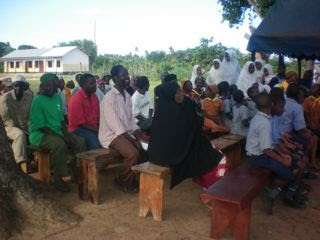 Because of Madrasa everyday during break but Thursday and Friday, students will come in August 13 and 14, August 20 and 21, and starting on August 24th, Madrasa takes a break and they can come every day until school opens on the 7th of September if that schedule suits everyone involved. This gives the students and teachers a lot of time during break with the computers.

The teachers involved will be Anita, the computer teacher, and Saade, who has been on leave and agreed to work in August to make up for time lost. She will train on the computers and will be able to assist Anita. Other teachers are welcome to come in during the break but are not required to. 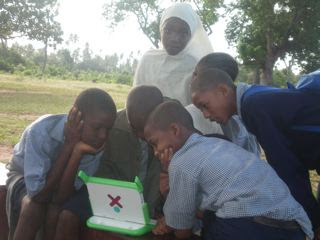 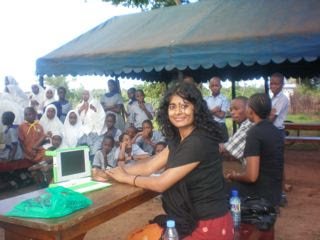 Priyanka and Bryan are in Takaungu and are already conducting teacher and students assessments in order to track the progress of the program. With their evolving understanding of the XOs, the country and the village and the implications of introducing these laptops in to this small community, they established their goals.

"What is success for us: Success is having the building complete, having power installed, having the teachers excited about the XO use and able to integrate it into their curriculum and allowing students to explore 'learning by doing' rather than just being instructed on what to do.

Eventually, we hope that security will be a very minute issue through community ownership of the program and students will be allowed to take the laptops home, because learning could be enhanced.

Challenges: power, corruption of Kenyan government and providing appropriate services, sustainability of project on teacher's part and student's interest in using them." - Priyanka and Bryan
Posted by Unknown at 7:36 AM No comments:

This week and next, Priyanka, Bryan and two teachers from the Vutakaka school are in Kigali for OLPC's training. They will be learning about the XOs, activity based learning, and planning for their deployment. Back in the States, we are brainstorming about the best ways to introduce the laptops to the community of Takaungu and to conduct teacher training. Breona will be heading to Takaungu as Priyanka and Bryan are returning at the beginning of August. She will be able to pick off where they left off and help to ensure the sustainablity of the program. Emma will be in the village for the months of August and September, along with another East African Center (EAC) intern, Kris, assisting with integrating the laptops into the school's ciriculum and Jen will fly in the winter, spendng a few months handling any issues that have come up by then and possibly bringing a set of 30 new laptops with her for the incoming class of students!
Posted by Unknown at 3:50 PM No comments:

An OLPC laptop on auction in Seattle! 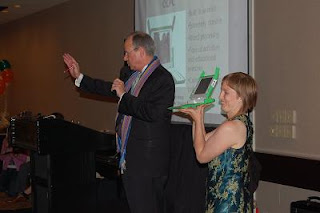 The East African Center (EAC) will auction off an OLPC laptop at their annual event. June 6th will be An Evening for Africa at the Hilton in Seattle. The event will include a dinner and entertainment with both a silent and live auction. All proceeds will go to benefit the EAC. At the auction Breona will introduce the attendees to the XOs, allow them to test them out and answer questions about the project.

(this OLPC cake and laptop will be auctioned off at the event!) 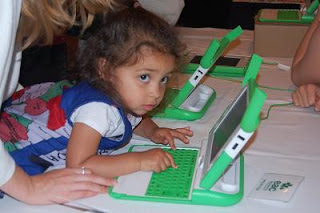 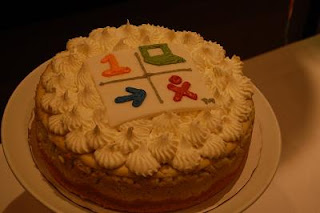 One Laptop Per Child (OLPC) 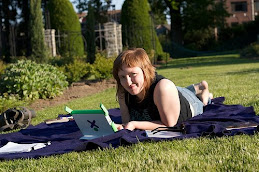 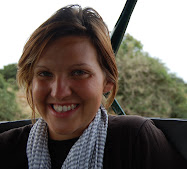